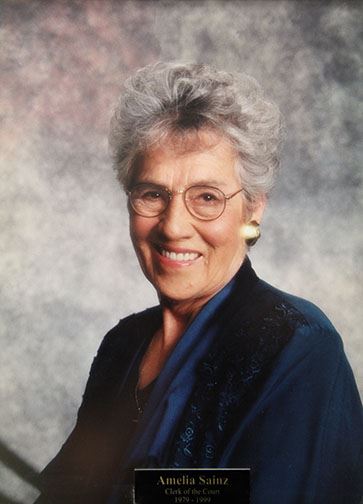 Amelia is a native of Graham County, Arizona, and was born to Gregorio and Paula Montez Chavez. The family moved to Pima when she was very young. The oldest of twelve children, her siblings are as follows:

After graduating from Pima High in 1942, she attended Gila Junior College (now EA.C.). Her business career began as a legal secretary to local attorneys for approximately 30 years prior to running for public office in 1978, winning the Clerk of the Superior Court's position then and re-elected to the post five times...never facing opposition in an election. She was last re-elected in 1998 and retired in May of 1999. Some of the attorneys that she worked with the longest were Guy Anderson, Charles M. Smith, Dee Flake, Dudley S Welker and Jack Williams. Amelia says "Mr. Anderson really took me under his wing, furnishing me with secretarial books and even giving me a ride to and from work for quite a while; he was a true mentor." She served under Judges Ruskin Lines, Dudley Welker and Douglas Holt. Her greatest joy was serving the public and being able to assist everyone who had business with the attorneys' office or Court or Clerk's office.

She married Frank Sainz after World War II and they were blessed with three children Diane (deceased), William and Anna; they have 5 grandsons and 2 great-grandsons. She spoils her family with their favorite Spanish food and enjoys doing so. She has been very active with community, business and church organizations.

At present, she is serving as Secretary-Treasurer of United Way, a position she has held since its inception in 1978. She has been a recipient of the Pride of Safford for her involvement with United Way; board member and officer of some of the following organizations:

She was twice named "Woman of the Year" for BPW, and was President of Arizona Association of Superior Court Clerks. She was honored with an award from Zel Hawthorne and Safford High School for her fundraising involvement with the DECCA students. "Fundraising" has been her forte and she has supplied some of the above organizations with many bottles of her famous salsa, dozens of burros, sold hundreds of boxes of Sees Candy and hundreds of raffle tickets. She spent a week collecting items and selling raffle tickets for an auction to benefit the Cancer Center.